Back in 2020, I performed a massive upgrade to the instrument panel for the QQ glider. The main reasons for this huge upgrade included:

Installing a transponder, so that Air Traffic Control can easily see my glider and route airliners around me. A transponder is a small radio transmitter that sends out radio signals that Air Traffic Control (ATC) can interpret.  The modern transponders are programmed with a unique signal identifying the aircraft. They also have a small altimeter on-board, so they report altitude information, too.  Any aircraft flying into the busy airspace around big airports need to be equipped with a new style of equipment that compliments the transponder, called ADS-B.  The ADS-B signal sends GPS information along with the transponder signal. In addition to sending location information, ADS-B is also rebroadcast by radio towers installed at choice locations.

What this means to you:  as a regular person, you can now get a great view about where all of the airliners and general aviation aircraft are at any time.  You can pull up a website called FlightAware.com to see details about those planes flying over your house.  Here's the FlightAware.com screenshot from my house here on a Thursday night: 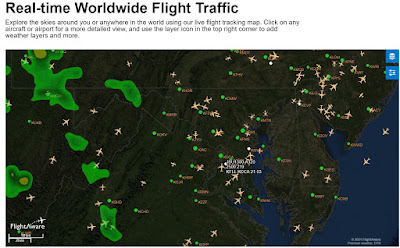 Now that QQ has an ADS-B installation -- in addition to the transponder -- You could watch my flight unfold as I'm doing it.  Here's the FlightAware ground track of a flight I took on the 23rd of January, 2021.
What this means to me: Now that ATC can see my little invisible glider very clearly, when there is an airliner bearing down on me, I don't have to depend on the airline captain to be looking out his window to see me.  ATC will notice me on their scopes, realize I'm a glider, and route the airliner around me. Aviation safety is definitely increased because of my transponder installation. There are places north of where I normally fly where aircraft come barreling over Winchester, converge over Winchester, and head on toward Dulles.  There are times when I'm flying at the same altitude as those airliners.  There are times I've been flying in an airliner and recognized the scenery that I've flown over this exact spot in a glider.  I've definitely got more peace of mind since the transponder installation.

Now that I have more screen real estate, I can get information about nearby aircraft.  Since other aircraft are also ADS-B equipped, I can see them on the flight display.  This is not a substitute for actually looking outside, as there are still many aircraft that do not have an ADS-B installation. When other aircraft are on a collision course, the flight computer gets information from an ADS-B receiver, detects if there's a possible collision course, and displays that information on the screen, along with a robot voice, telling me where to look.

There are times when I'm flying the glider, and the lift has quit.  I have the option of landing in a field somewhere.  I have come to prefer landing at airports -- there's so much less drama.  But if I'm doing an unexpected diversion toward an airport, maybe it would be handy to have that information on-hand when I'm going there.  What is the tower frequency?  What is the runway length? What sort of facilities can I find? Back in the old days, you would carry a book with you called the "Airport Facilities Directory."  If you've ever seen my skinny cockpit, and my non-skinny presence, you'd notice there is a distinct lack of space.  Not even much space for a small booklet.

That booklet is obsolete every few months, takes up a lot of space.   The flight computer stores all that information, and makes its recall really easy.

The LX9070's interface has the capability to upload any pictures of an airport, which I import from the FAA's published information in the Digital Chart Supplement (which used to be called an Airport Facility Directory, AFD).  I also found a way to easily show the landing checklist, along with the airport diagram, and details about the airport.  Neat.

We can fill up the water tanks in the wings and the tail to make the glider heavier.  I do this at a penalty of increased sink rate, but a much higher benefit of a speed increase.  There is no penalty for the overall glide ratio by making the glider heavier.  In order to calculate how much faster the glider should be flown, some careful calculations for how much water should be added have to be evaluated against the maximum mass that the glider can sustain.
In the example to the right, I can fly with two reasonably heavy pilots on-board, another 66 liters of water in the wings, 10 liters of water in the tail, and still be within the flight limits of the glider.  The nose isn't too heavy (from the heavy pilots) the tail isn't too heavy (by adding too much water) and we haven't exceeded the maximum mass of the glider.   The chart to the right shows the dry mass with a green dot, and a blue dot (at the middle top of the chart) showing the wet mass.
With the new flight masses computed, the flight computer automatically adjusts the suggested speeds, to make the most efficient flying speed possible. In the old ways, I would just have to eyeball-it for a number that was maybe-right-maybe-wrong.

While competing at the Region 2 competition in Mifflin, Pennsylvania, our first competition day was a ridge task.  After I got out of the start area, I set out on task. The task involved ridge soaring to a location called Spruce Creek, PA.  The pink line shows my direct course to the waypoint, the grey line shows the current ground track.  I can see the winds in two places, one little arrow next to my glider icon, and another representation of the estimated winds in the bottom left corner.  On this page, I have the current glide ratio (which was showing infinity, meaning I'm not descending at all), along with a "You need this kind of glide ratio to get to your waypoint, which is 49 in this picture.  In other words, "If all the lift stops right now, you need 49:1 glide ratio to get to the waypoint.  My glider can only generate 44:1 at its best, and I would come up short, without the assistance of any lift along the way.