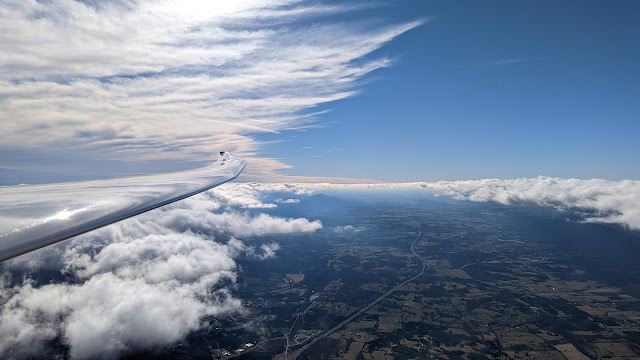 Here's a recap of the flight with in-flight photos:

Syed and I launched to overcast skies; maybe a spot or two of blue might be seen. I elected to leave the oxygen system on the ground and launch anyway.
I took a 4000' tow. The headwinds on the flight computer showed 340 at 11. We released between Signal Knob and the Strasburg quarry (1728Z). I circled around in some weak thermals. Nothing really usable over Signal Knob or Meneka Peak (1740Z). The computer said the winds were too northerly for me to go run the ridge (See my diagram below, which I've drawn from experience, anecdote and survivorship bias; the numbers on Sunday were between "Marginal" and "My Limit" ). Eventually I found a good thermal right over the fish pond (1751Z). I worked my way upwind to the next band of clouds (1800Z). Riding just below the clouds, I gained speed, popped out in front of the cloud and got into the wave (1803Z). 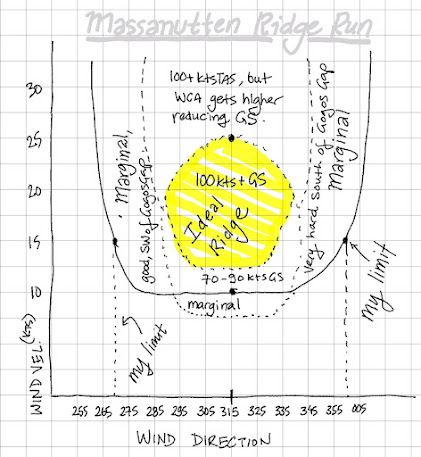 By 1805Z we were in the wave, in front of the clouds, and climbing on a northeasterly course toward Stevens City. We turned around, headed south back toward the Massanutten. The clouds were starting to clear out and the lift bands were getting more defined at this point. You can see the photos taken in weglide; there are little camera icons at each point in the flight. 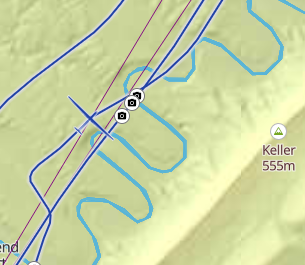 At 1904Z we connected with the best wave lift of the flight; a solid 5-6 knots right over the town of Woodstock.  We stopped climbing because I didn't have oxygen, and I really don't like flying high without oxygen. My personal limit is 10000 feet and I won't go a foot above it. Did you know that the EASA rules for flying gliders in Europe prohibit flying gliders above 10,000 feet? They had enough marginally hypoxic pilots smash into the side of Mont Blanc to change the rules for all of Europe.
By this time the clouds were really well defined.  You can see the sat photos overlay with the flight in SeeYou.  By this time, it was just a matter of "follow the clouds, and you'll find lift"
This sat photo was taken approximately the same time that I was at the arrow location in the SW corner of this flight. 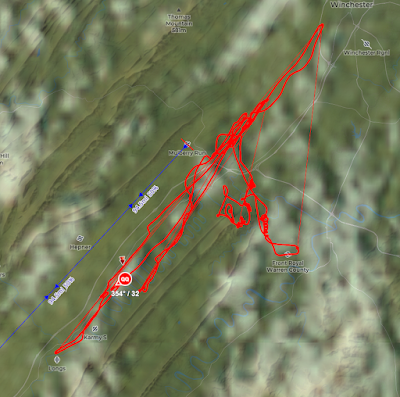 At 1920Z I leveled out at 7600 feet, turned the vario into "netto mode" and tried to maintain altitude while flying as fast as possible.  I got a true airspeed of 104 knots until 1940Z, where the wave wasn't as strong.  We kept going north toward Winchester.  By this time, my bladder was starting to complain, so we decided to head back.
The AWOS was reporting 340 at 9, variable wind direction from 030 to 330.  This should be exciting. I guess it was uneventful, but not my best landing.
I managed to have zero wave flights in all of 2020; the first time in more than a decade that I hadn't gotten into any wave at all during a year.  2021 turned out to have wave at least 8 different times throughout the year, including one in July (!)  This is two flights this year that I thought there "might" be wave, and I left the O2 system on the ground.  I should revise my plan that even if there isn't a 5% chance of wave, I'll pack it onboard.  Who knows?!
SkySight really under-predicted the wave; here's the IGC overlay against the 10000' wave prediction for Sunday: 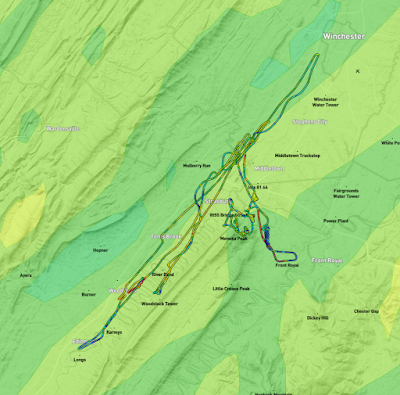 abrahaimkabel said...
This comment has been removed by a blog administrator.
February 28, 2022 at 5:32 AM