This past weekend I attended the Virginia Soaring Association Thermal/XC Soaring Camp (week 1). All of the soaring clubs in Virginia meet once a year in January.  During those meetings, the presidents of each club (and a few key members) share ideas on how to grow each other's soaring clubs. We share tales of working with the FAA or the SSA.  At the last meeting, somebody opined that it would be wonderful if all of the soaring clubs in Virginia could get together to practice flying in thermals.  So we did.
http://virginiasoaringxccamp.weebly.com/ 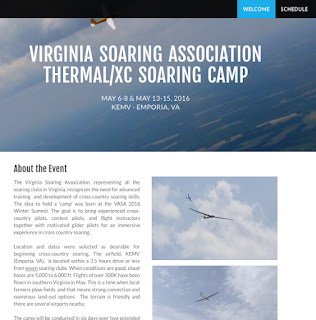 This event is spread over two weekends, and we just finished the first weekend.  Members from Tidewater Soaring Society (Windsor, VA), Merlin Soaring in (Ameila, VA), Shenandoah Soaring (currently in Petersburg, WV), and Skyline Soaring club (Front Royal, VA) got together in Emporia, VA.
I left on Thursday evening to drive my two seat glider down to the bottom of the state.  The drive was about 4 hours through the winding back roads to I-64, then I-95 to Emporia. The weather en route was terrible; heavy rain, poor visibility, and aggressive drivers zooming by me and my 2800 pound glider trailer.

Friday: We sat inside and looked at the cats-n-dogs of rain outside.  We spent the time constructively.  Jim Garrison gave many lectures about how to fly a glider away from the airport.  The lectures covered many topics such as: "Off Field Landing", thermalling techniques, what speed to fly when flying between the thermals, and there was also a lecture on the etiquette of flying in a thermal with many other gliders.


On the final day of Cross Country Camp, we finally got some seriously good soaring weather. I took the Duo out for a 300k triangle, with Pete Appleby, JP Stewart, and Brandon Pierson from BRSS.
The first leg of the trip was from Emporia to Merlin Aerodrome.  From there, we were to go to an airport called William Tuck airport, right on the North Carolina - Virginia border.  Then back to Emporia.
The soaring was excellent on the first third of the trip, but much worse on the second leg.  Once we got to Merlin, the 6 and 7 knot thermals turned into 2 and 3 knot thermals.  I limped along between the two Military Operations Areas of Farmville and Pickett.
As I got south of the Farmville MOA, I looked at a blue sky ahead, and not many prospects for good soaring. I turned and headed home, 15 miles short of the second turnpoint.   The rest of the trip was pretty easy, with a 15 knot tail wind.

Earlier this year, Shane convinced me to sign up for the contest in Mifflin. "All you have to do is not mess up, fly safely, make it around the course, and you'll be in the top third for the Sports Class."

Doesn't seem that hard.  I fly pretty conservatively, don't land out often (with a few exceptions), and can make it around most courses.  Let's give it a shot!

Four weeks prior to the beginning of the contest, I did my best effort to get the PowerFLARM Core unit installed, and acting as the GPS source for my ILEC SN-10 flight computer.  I spent two beautiful soaring days on the ground trying every wiring combination, scratching my head, reviewing the documentation for the SN-10 and PowerFLARM, and finally gave up.   After a consultation with Dave Nadler of ILEC, we determined that the problem might be due to a bad serial port on the SN-10. I'd have to send the unit to ILEC for servicing.

I was so frustrated with that old thing that I swore, "If it's coming out of the instrument panel [for servicing] It's not going back in to the instrument panel!"  I was so frustrated with the SN-10, that I was ready to jump up and down on it after its removal and re-enact that scene from Office Space, when the frustrated IT workers took a crotchety printer out to a field and ended it with baseball bats and angered stomping.

I purchased a brand new flight computer and set of variometers from Cumulus Soaring.  The new units were an LX-Nav 8080 with V8 variometer.  In the back seat, there would be an LX-Nav 8080D (that shares information with the main unit in the front seat), and an LX i8 variometer repeater.  There are units that are larger, but I really didn't want to cut a new hole in the panel, and I don't think there is any room in the front seat, anyway.  The LX 8080 is a drop-in replacement for the SN-10, taking up about the same amount of volume behind the panel, and taking exactly the same amount of square centimeters on the instrument panel.

What this means to somebody who isn't familiar with the products: It's a small color screen that displays more information about my flight than I really know what to do with.  The previous flight computer was designed in the 90s, and is almost 20 year old technology.  The interface is kind of clunky for modern computers, and the display is kind of like an old blocky Atari gaming system.

Every time somebody sat in my Duo, I'd have to explain to them that most of the information on the SN-10 wasn't valid. "There's no GPS source, so the flight computer still thinks it's in Cesar Creek, where Karl flew his last contest before selling me the Duo."  The SN-10 is complaining because there's no GPS source.   I've had enough with this dang thing!

The new LX unit didn't arrive until a few days before the contest in Mifflin.  Of course, I couldn't bear to fly that contest with the mostly-non-functional SN-10, so I arranged to have the glider in Shane's shop to swap out the old with the new.

Removing the SN-10 wasn't particularly difficult.  "Just keep unbolting things until bits start falling out of the instrument panel."   I spent one evening getting the fuselage into Shane's shop, taking out the seat pan, removing the instrument panel covers (front and back), and carefully keeping track of all the bits I took out to get the SN-10 safely extracted.

Instead of battering the SN-10 into dust, or shipping it to ILEC for servicing, JP Stewart has asked for it.  I'll happily get rid of it, so it can have a new happy home at BRSS in New Castle, VA.

Installation of the new unit got much easier when we removed the nose wheel.  Fishing the cables down the throat of the cable hole, down under the seat pan is much easier when I can reach in where the nose wheel is supposed to be, and route cables through the front.  I wish I knew this when I had the PowerFLARM installed a few months ago.

Once all of the LX-Nav parts were installed, I had an A&P look over my work, and sign it off.  There was a brief moment of cautious confidence when we turned the whole system on.  Despite reading all instructions and installation manuals thoroughly, there's just that uneasy moment when turning on that sort of unit for the first time.  We called it "The moment of 'poof'", because if something got wired incorrectly, something was going to go poof and release the magic smoke.

Nothing went poof, so after we turned it on, replaced all of the instrument panel covers and seat pans, I put the glider back into the trailer and drove off to Mifflin on Saturday afternoon.  The contest's practice day was Sunday, but I wasn't likely to get any practice days to shake out any issues I might find with the new system.  A very big rain storm canceled soaring operations from Virginia to New York, and was doubtlessly going to cancel my shakeout flight on the practice day.

I drove to Mifflin in the rain, in the dark, with some pretty sketchy directions from Google, that took me over a very dark mountain.  I enraged many pickup drivers as I gripped the steering wheel with white knuckles and insisted on driving the speed limit on two-lane roads to the soaring contest. I arrived on Saturday at 11:00 PM, and once I dropped off the trailer, I headed to a Super 8 Motel in State College, PA.
Posted by Piet Barber at 23:22 No comments: