During the COVID-19 shutdown in March through April 2020, I spent a lot of time and money to upgrade the instrument panel for my glider.

When I first bought the glider, QQ was equipped with an ILEC SN-10B.  The ILEC SN-10B is quite old as far as flight computers go, but it's still quite capable for doing many navigational and contest tasks.  However, when I got the flight computer, there was a small problem with it.  One of the pins in that flight computer's serial cable had broken, which made it impossible to upload information into the SN-10.  I replaced the SN-10 with an LXNav 8080.

I installed the LX8080 a few days before my first contest at Mifflin, and quite frankly had no idea how to operate it on the first day of the contest. By the end of the contest, I had figured out most of the things I needed to do to make it useful.  Over the next 3 years, I grew to master its function, and actually got to like it.  It was much better than the old SN-10 that it replaced. 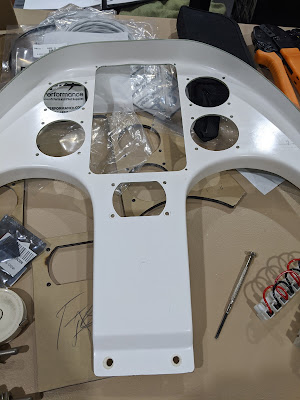 Around September of 2019, I started realizing that this flight computer, although capable, was rather small for my aging eyes.  It is only the size of a standard 80mm diameter flight instrument.  While this size is quite convenient for making it a drop-in replacement for most other instruments, it's really not a good size for many of the new features that are in the later models of the flight computers from the same manufacturer.

I had ordered brand new blank instrument panels from the glider's manufacturer in August of 2019. By December 2019, I had ordered all of the equipment for the replacement panel.  Items started showing up in January and February. I had a friend do most of the work in cutting out the holes in the panel with a laser cutter, a router, some drills, some files and sandpaper.

I spent many evenings wiring up the back of the panel. I sent a nightly email to the certified aircraft inspector who decided to mentor me through this whole thing.

By June, I was flying with the new instrument panel. The whole task of doing the panel upgrade was a huge effort and deserves a page of its own.

After everything was installed, we performed a weight and balance. I created a Google Sheets document to simplify the task of handling all the data for weight and balance (W&B): pilot mass, parachutes, wing water, tail water.  There are many things that have to be verified when handling the weight and balance.  If there are any items out of the required parameters, the checklist shows a warning or an error bar.  All of the numbers show up on steam gauges on the spreadsheet. 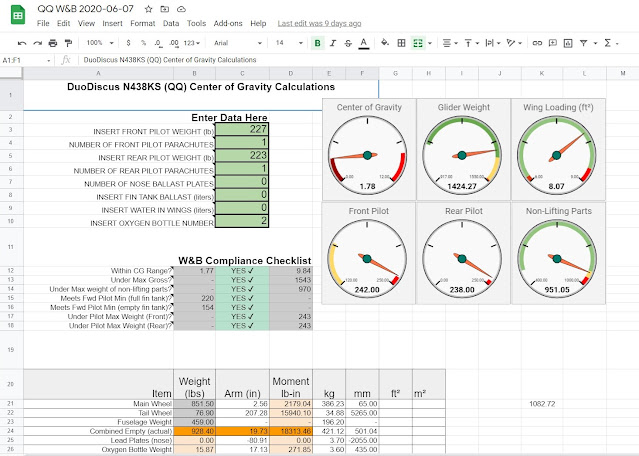