2018 was a terrible soaring year.  Washington, DC recorded more rain than any other year in history. It seemed that every weekend was rainy and stormy, or cloudy and miserable.  For the most part, QQ sat in her trailer for the 2018 flying season.
Hopefully 2019 will be a better flying season. This past weekend was hopefully a signal that things are getting better.  Skyline Soaring Club put together an ad-hoc operation to fly on the 7th of January 2019, and it turned out to be a great soaring day. It was not always obvious that it was going to be a great soaring day.  Many of the sources of information that I use for soaring forecasts were disabled due to the latest Federal Government funding crisis. The NOAA's rucsoundings website showed me this apologetic message: 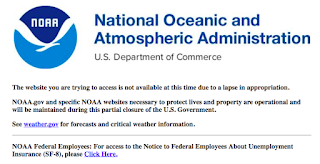 Normally, I view the NOAA's rucsoundings webpage to see if the following conditions are being forecasted for the day:


As we did our morning briefing, I asked if anybody wanted to be a passenger for flying in QQ, and Pete Maynard raised his hand immediately.  We assembled QQ, installed the oxygen bottles (which I normally don't have installed during the summer months), installed the oxygen systems, put on my electric socks and all of my warm clothes, and I installed my male external catheter, just in case.

Our towpilot asked where we wanted to go.  I responded that we wanted to go to Signal Knob, at or around 3000 feet above airport elevation.   The flight computer did not report any winds, but corrected once we made a few turns. Either the flight computer was narrowing in on accuracy for the winds, or the winds weren't that strong yet. For the first 30 minutes of the flight there was lift, but it was turbulent, spotty, and erratic.
Instead of immediately heading off to fly low and fast on the ridge, I wanted to connect with the wave.  Earlier sightings of the scrappy clouds we recognize as rotor clouds were proof enough to me that the wave was somewhere out there.  Pete and I were jostled around for 30 minutes in moderate to severe turbulence, grinding back and forth in front of the Massanutten mountain just south of Strasburg, VA. There were a few moments where I was sure we had made it into the wave, only to be thwarted with a downdraft erasing all of my temporary gains.  There were brief moments when I had full control deflection, and the glider didn't respond to the aileron control inputs.

I gave up after 30 minutes of attempting to connect with the wave.  Without anybody to tell us that the ridge was reliable, and a flight computer indicating that the winds were only about 8 knots, I set course to fly along the ridge top anyway.  On some days, this is a bigger gamble than others.  Sometimes the wind is not strong enough to keep the glider from descending. I took the calculated risk, understanding that there are plenty of fields to land in if it didn't work out.  I've done it before!
Good news! At about 500 feet above the mountaintops, I could maintain 80 knots of airspeed without descending.  Past experience with these ridges on days like this told me that if the wave wasn't achievable in Strasburg, then there was going to be a better chance above Short Mountain. Short Mountain is a 7 mile long ridge which is the mountain between Edinburg and Mount Jackson, VA. It is slightly upwind of the rest of the Massanutten mountain chain. There are days when the only way to get into the wave is from Short Mountain.
Doing the quick jaunt south was definitely the right choice. Once we made the short upwind jump, the bone-jarring turbulence was gone, now reduced to mild annoying bumps.  I performed figure eight patterns on the upwind side of Short Mountain, and attempted to drive upwind into the wave at around 6500 feet MSL.
At 6700 feet MSL, the mild annoying bumps turned into the most smooth air that could ever be described.  Once making that transition, words really fail to describe the joy of achieving that smooth air with strong steady lift.  It was after we got into the wave that we put on the oxygen masks and started taking pictures.

Since I brought along the oxygen, this was a good time to put on the mask and to see just how high the wave lift will take us.
Soapbox: The FAA mandates that oxygen mask usage must begin at 12,500 feet, but as a personal rule, I will start using oxygen at around 9000 to 10,000 feet. I have the oxygen system, it is extremely cheap to replace the air in the tank, there is no good reason to have a macho attitude about how high I can go without needing the oxygen. The brain loses its function with oxygen deprivation. Unfortunately, the brain is the only device that detects if is losing its function. An oxygen-deprived pilot will get stupider and not even realize it. Check out this video of an airman in a hypobaric chamber: the airman is trying to read out loud the cards in a deck with hilarious results in a controlled environment. If I were to exhibit the same results while performing the duties of a pilot, the results would not be nearly as comical.
On the way up, I occasionally took some photographs to document the victory. The rate of climb was steady at around 400 feet of climb every minute. We topped out this first climb at 12,000 feet. The winds were significantly stronger at this altitude. The flight computer indicated that winds were still from the northwest, but now at 51 knots. During our climb to 12,000 feet, the flight computer would occasionally show our ground speed as completely canceled out by the wind. If I slowed down a little bit more, the glider would be flying backwards into the wind, which the flight computer was nice enough to show as a negative ground speed.
Once we topped out at 12,000 feet, I decided to head south to get some OLC points.  I wanted to get to Harrisonburg, VA, but was willing to see what kind of lift we could find along the way.  We contacted some strong smooth wave lift that took us to the highest altitude of 14,800 feet.  From this altitude, the lift got weaker, and hanging out here would not get us to cover any ground.  I turned south again.
With a right crosswind and good airspeed, we were occasionally flying along with a groundspeed of over 110 knots.  While cruising along in the wave, it is important to stay in the updraft, stay out of the downdraft, and more-or-less maintain heading.  Also the wave changes position, due to shifting winds, varying geography below, and just plain luck.  The key to flying like this is to make small course corrections.  When the lift disappears, make large course corrections; sometimes by 90 degrees into the wind.
We turned around near the Massanutten ski resort, and headed to the north. As we headed north, I tried to get the glider slightly further to the west, hoping that the wave lift would be stronger.  We bopped along with occasional course corrections to stay with the lift, and eventually made it to the West Virginia border.  Our most northerly position was at the border of Virginia and West Virginia.
We could have flown for much longer, but the daylight was starting to run out.  By 15:30, I started thinking of returning to Front Royal with enough time that we would put the plane away with daylight remaining. It really is a burden to disassemble a glider in the dark. QQ is not legal to fly after sunset at 17:08.  After one last climb over the Alleghenies, we did a final downwind dash with 50 knots on the airspeed indicator, but 110 knots on the groundspeed.  By 15:55 we were over Front Royal at 10,000 feet.  I downdraft from the wave, and we descended in that air at about 500 feet per minute. We were on the ground by 16:09.  Sunset was 17:08.

Ayvri.com has a pretty animated graphic of our journey. 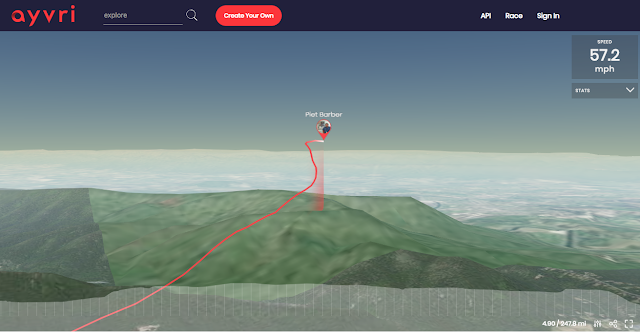 Soaringlab.eu has a lovely replay of our flight, too. 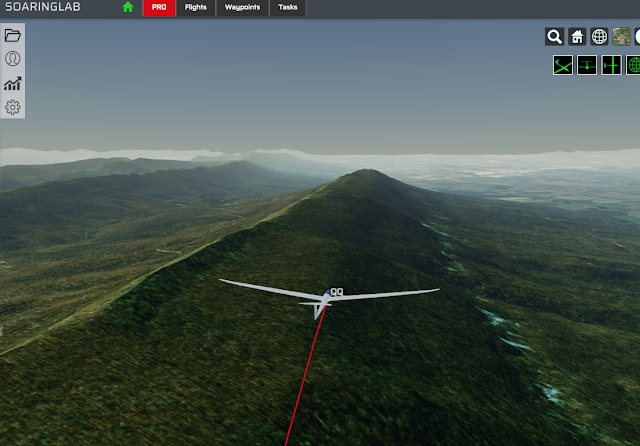 Of all the glider flights in the United States, ours was the one with the most points (from what I can tell). 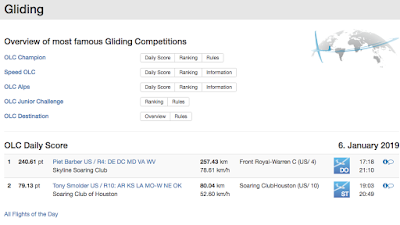 This may sound impressive, but in reality this isn't such a big deal because there normally isn't much glider flying in the US on January 6th.

Here's the flight with the IGC trace:
https://www.onlinecontest.org/olc-3.0/gliding/flightinfo.html?dsId=6984465