I kinda suck at glider racing.  I'll be quick to admit. I'm here at the 20 meter multi-seat nationals contest, and I'm among a group of pilots who have a lot more cross country experience than I do.
I convinced two Skyline Soaring club members to come with me to Minnesota for the contest.  This involved taking QQ in a trailer for 2 straight days of driving; twenty hours of driving time.
Yesterday (Saturday) was the practice day.  It was grey and yucky, and I didn't fly the glider.  Today (Sunday), and it looked like one of the better soaring days I've seen in over a year.
2018 was a terrible soaring year. I had only one or two really good soaring days among all of the practical tests I administered, and all of the rainy weekends.  Maybe this year will be slightly better.
The morning started off with blue skies with only a little bit of overcast.  We assembled the glider and got to the grid by 11:30. I was the fifth to launch. I haven't put water in the glider very many times, so that was kind of new for me, too. Our ramp weight was somewhere around 1500 pounds.
I didn't really understand that the weather was just going to get better and better as the day went on, so once the task was open, I was off on the course.  The task started with a 5 mile start cylinder north of the airport.  I exited the start area on the backside of the course.  I made OK time north to the first turnpoint. I didn't see any gliders, so I assumed I was in the back of the pack.
I made it past the first turnpoint and still didn't see anybody.  The conditions didn't look that great; the clouds were getting big and I thought that the conditions were getting slightly overdeveloped.  At this point in my flight, I got to the lowest altitude, and started getting desperate for any sort of lift I could find.  I found something terrible, and limped up to a better altitude.  I saw the rest of the pack catch up to me at that point.
After the second turnpoint, the remainder of the day was the pilot's choice.  A type of task called a "MAT".  The pilot chooses which turnpoints he is going to fly to. All turnpoints are 1 statute radius circles.  Repeat as much as necessary to get the minimum time in the air.  Today's minimum time was 3 hours.

I was rather overwhelmed with the task of finding new waypoints.  I also struggled with the flight computer, coming up with turnpoints that seemed OK, given the current conditions.  I thought the conditions to the north looked terrible, and it seemed to me that there were better-looking clouds to the southeast.
We went south, and just kept going east to Austin MN.  I kept going upwind, east.  The conditions were getting much better now.  Anywhere I went, the thermals were at least 4 knots, and sometimes as strong as seven knots.
I had a nice tailwind on the way home. I was the first to get back from the task.
After dinner, the scores came in, and I'm not surprised, but also disappointed.  Seventh place out of seven.   Well of eight contestants.  The eighth guy hasn't started yet.   Well... at least I'm in the top ten?!

Areas where I feel I could use some improvement: 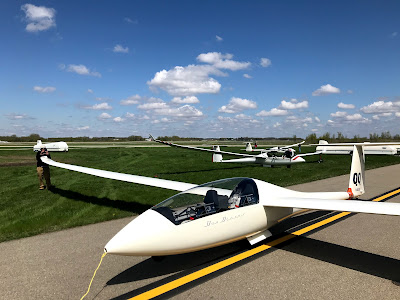 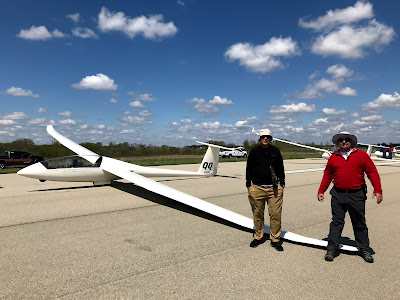 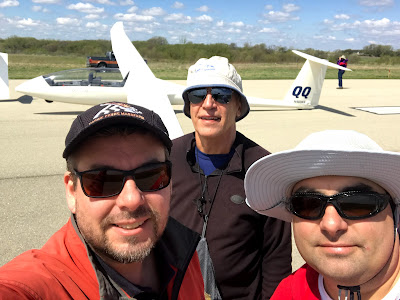 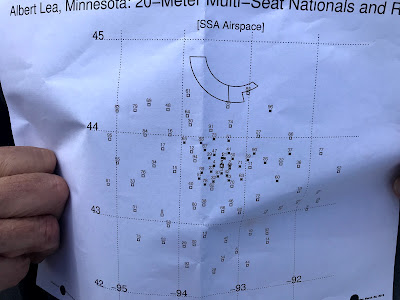 Very interesting post.
Where is the "I'm having a blast!" part.

Hey Piet, where did you pull those great fleet tracks from? I can't pull up anything like it on the Glide.aero site or the OLC site. Cheers, Christina