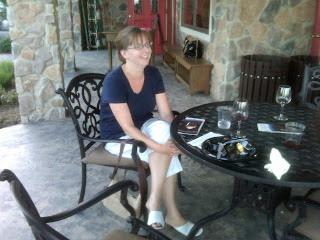 When I first signed up for the race, I decided to go to the special pre-event dinner, held at the Bluemont Vineyard in Bluemont, Virginia. Stacy isn't a wine drinker, and I'm not much of one, either.  We showed up on time, and enjoyed the beautiful view of Loudoun county, as seen from the mountains over Bluemont.  We could see all the way to Brambleton from the winery.


After eating a nice buffet dinner, with two glasses of red wine (I enjoyed the wine), we got a tour of the winery, which is still quite small. I tried not to eat too much, and I also tried not to drink too much.  We didn't want to be out too late, I had an important function on the next day, after all!

Just as Stacy and I were about to leave, they started having speakers tell us about the decision to have a Destination Races event in Loudoun County.  There also was a representative from the Virginia board of tourism telling us a lot about the history of this new form of agriculture in Virginia. 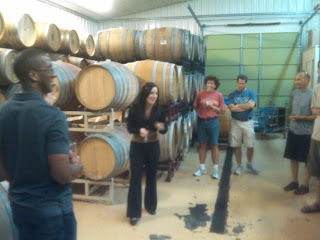 Race Day
I woke up at the very uncivilized time of 0430. The drive was in the dark, and without a GPS, I took a few wrong turns.  I arrived at the Doukenie Winery parking lot at 0540. My two DailyMile running buds Ray and Stu saw me drive in as they were waiting in line for the shuttle bus.

I am pretty bad about figuring out how early to wake up, in order to get to a race on time. It's a good thing that Ray sent an email earlier saying what time he would be there, because I was going to show up later than 0540. If I had followed my original poor plan, it would have been a disaster! A few minutes after my 0540 arrival, there were traffic jams leading into all of the roads leading into Breaux Winery, where the race was starting. Eventually, the traffic jams were so choking, that the race's start time was delayed by 30 minutes. This was the inaugural race, so I expected there to be some rough edges. Parking is usually the first rough edge that makes everybody unhappy.

Earlier in the week, it was brutally hot and humid, around 90F with very high humidity.  I had never seen 100 degree days in early June, and was sure that the race was going to be ruined by the brutally hot weather.  Thankfully, the weather broke and got cool starting on Wednesday afternoon. However, this cold weather was unwelcome as I stood in line around at 0600 waiting for the next shuttle bus to take me to the start line.  I actually was shivering, just like everybody else who was in line.  I managed to get the last seat on my shuttle bus.

I met Ray and Stu at the gear drop-off area, and lost track of them when I went to the porta-potties one-last-time before the gun went off. Met some nice people in the 2:40 pace area before the race started; one of whom wrote the  Virginia Wine Dogs Blog. They visit all of the wineries in VA, and this was her first half marathon. 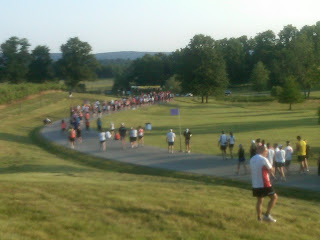 I started the race behind the 2:30 finish-time pace people, and caught up to them at mile 2, and hung with them for 7 miles. I had made a miscalculation for what speed I had to run to make a 2:30 finish, and incorrectly calculated the time to be 11:44 minutes per mile, instead of 11:22 minutes per mile.  After around mile 8, it was my mistaken impression that they were not acting like 2:30 finishers, but more like 2:20 finishers. As they passed me, and ran off further and further off into the distance, my calculations were insisting that I was still 3 minutes ahead of my 2:30 virtual partner.

There was some heinous gravel down around mile 8, which I managed to keep pace on for more than a mile but less than 2 miles. Runner after runner would come up to me and ask, "how are those feet holding up?" Not too bad!  It was not nearly as bad as I had thought it would be.  After seeing that gravel, I'm glad I didn't decide to run this race barefoot, for sure.  The good thing about running on the gravel part of the race (at the bottom part of the U shape on the course), is that it was under the shade of trees.  What little sunlight there was was covered by the trees, and kept the area cool.

After mile 10, we came out from under the shade of the trees.  Things were starting to get hot, as the sun beat down on us from the east. The race diverted all northbound traffic on route 690, and those who had gotten to be on route 690 southbound were stopped in dead-stop traffic. As we ran by, those who were stuck in their cars were looking very irritated.  I tried to cheer them up, and in by doing so, also get the runners around me all pumped up.

I caught up with Stu just before mile 10, and we shared the apple wine together.  Most races just have Gatorade and water, but this race had some sports drink I've never tried before, called "Heed".  The Heed didn't taste that great, but the apple wine sample I had at mile 10 was was great! I could have used more water, though. The water cups were small, and I sweat a lot.  After running in the hot sun, I was actually stopping at the water stations to get 4 or 5 cups of water.

By mile 12, I was no longer able to keep the 2:30 finish time pace, my virtual partner had eeked out 1 minute ahead of me.  I was running out of steam, and I had no choice but to slow down. I was huffing along at 15 minutes pace with maxed out heart rate through Hillsboro Cemetery. (maybe this was an uphill part). I got to a water station, and stood there, drinking repeatedly. One water after the other.

Why yes. This is a unique race in many ways. How many races have you ever heard of that takes a part of its course through a cemetery!? The race director at the beginning repeatedly insisted, "if you have problems going through the cemetery, you can take the detour and go straight without penalty, but it's a longer trip. "  I think it would have been more dangerous for runners to do that. This part of route 9 wasn't blocked off from traffic, and there was no shoulder to safely run on.

Right after the cemetery, but just before returning to route 690, to continue going north, the traffic cop stopped us runners to let a batch of traffic through on route 9 westbound. Some runners jogged in place.  Some even ran in between the traffic anyway (Scofflaw!) I sat on the guard rail for a minute, as some traffic got let through. I was delayed by almost 45 seconds for the traffic pause.

The last mile was grueling.  I was probably bonking.  I could hardly keep a 14 minute per mile pace as the course got hillier.   The last 0.1 miles was all on the gravel driveway into the Doukenie winery.  I ran very carefully, as I picked my way around the gravel.

I finished ahead of my finish time from the Marine Corps Historic Half, so I got a PR, and that is really all I can ask for. I didn't leave anything on the race course, I used up everything I had.

Post-Race
After I got through the finish line, I had that spaced-out look, to the point that one of the medic tent people asked if I needed any medical help. :( (!) I didn't. I just needed a nap and some water. I crawled up next to the VIP tent, in the shade, on top of an ant hill (that didn't last long), and eventually moved toward the main part of the event, where I took a nap in the shade. I'm pretty good at sleeping anywhere with no bed, no pillow, no support, no blanket or anything. I think I was out for a good half-hour. I was too busy napping to meet other DailyMilers. I didn't taste much wine; since I'm not a drinker I can't tell a good wine from a bad wine, which some people tell me is a nice kind of ignorance to have.

I think there were more runners as a part of "Team Challenge"  There were people from all over the country, and us local yokels were in the minority. Seventy percent of the racers were women. I've never experienced a race with that many women before. It didn't matter much if they were women or men, they all still passed me just the same. Women are generally more likely to be curious and ask about my "weird toe shoes", so if I wasn't napping, somebody was starting a conversation with me. :)

I would recommend this as a good first half marathon; just make sure you show up early. I'd also recommend bringing some wine-drinking friends and a picnic basket. Taste them all, find a bottle you like, buy the bottle, and enjoy the summer picnic with your friends.  Registration for next year's race opens in September 2011. 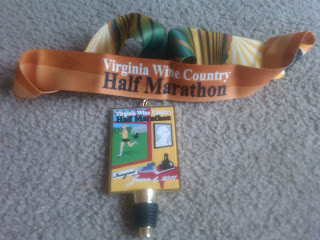 The race finishers got a very nice medal.  This medal is quite different, because it also doubles as a wine-bottle stopper.  Not that I ever drink much wine, but it's kind of neat anyway.

Along with the medal, the racers also got a very handsome technical running shirt, white with red under-arm trim.

We also got a wine glass, which was to be used for the wine tasting after the race. It will go well with the rest of my wine glasses.


Pictures
Since I was running without the family showing up, I didn't get many personal photos. I have a few blurry photos from my cell phone camera that didn't come out so well.  The race also took photos along the race course, which are posted here: http://www.brightroom.com/go.asp?101901547 I didn't purchase any of them, and there's no telling how long the link will continue to work.