I had asked Cecilia if she had any interest in running the Marine Corps Run Amuck race with me.  I had seen signs for it at the half marathon that I had run earlier in the month.   Cecilia agreed.

The Run Amuck race is a 3.5-4 mile race, where runners go through an obstacle course in the forest outside of Quantico Base, in Virginia. As a part of this course, runners must slosh through mud puddles, muddy pits of water, and climb a very steep muddy hill with no traction at the end of the race. 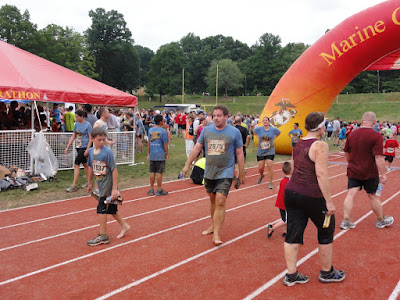 Cecilia, Stacy and I spent the night in a hotel nearby, on the night before, and set out early for our race time, starting at 8:55.   Since there were 2300 participants, there is no way the race would be any fun if all 3000 participants left at the same time.  So they set up 30 waves of runners, each about 80-100 runners, running out every 10 minutes. Since we were such late registrants, we were in wave 28.

Since we had arrived early, we had time to sit around and look at the other runners. I was thoroughly AMAZED at how many other runners out there were wearing VFFs.  The last time I showed up at this race track (Butler Field) in Quantico was for the Marine Corps Run2Register 10K, back in March 2010.  I was one of two people wearing VFFs in that race, with a similar number of runners.  This race must have had 40 runners wearing VFFs of some sort.

In order to train for this event, Cecilia was already able to run 3 miles, having done so at school recently, during an event called the "Fun Run" I can't imagine running 3 miles as a kid, and calling it fun, but she did, and she also seemed to find it to be fun.  We purchased her first pair of VFF shoes, so she could run like me at the race.

As we got started, Cecilia and I kept to a very slow pace.  I can't tell you how slow, because I left the GPS watch at home.  There was no way I was going to get the GPS watch filled with mud that was never going to be able to be removed!  Since Cecilia isn't much of a runner, she was suffering as we were going up the first big hill to the beginning of the obstacles.  She would stop every quarter mile or so, and I would stop, turn around, and encourage her to start running again.

By the time we got to the top of the first hill, I didn't have to encourage her to run anymore, she was going full-speed -- running head-long into the first obstacle:  A huge pit recently dug out with a bulldozer, and filled with mucky, brown water.  Cecilia splashed and frolicked.  I had to remind her this was a race, and not a swimming hole.

Through the course was quite hilly, with many ups and downs through the forest.  We came upon a set of tire obstacles, where the runners had to place their feet in the tire holes, while moving along (just like you see in all of those football movies).  There was a pair of tunnels, where the runners had to crawl through.  Following the tunnels was a barbed wire obstacle. Well, it wasn't REALLY barbed wire, but a bunch of string at waist level, that you had to crawl under.  I would suppose that the lowest strings had been knocked down by the prior 2200 contestants, as it didn't seem like much of an obstacle to me. 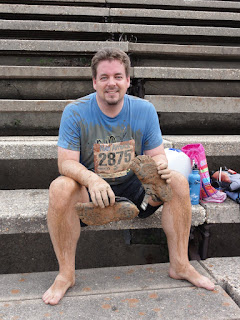 There was a wall that the runners had to climb over, and land into a pile of hay.  This is where Cecilia left me behind.  She was about 30 meters in front of me, and never looked back.   As we approached the final obstacle -- The Muddy Hill of DOOM!  I had completely lost her.


The muddy hill of doom was a wasteland of people who don't know how to climb up a muddy hill.  Although it was quite a steep hill, seemingly at a 30 degree angle or more, most participants were going up this hill on all fours.  The previous 2200 participants may have knocked down the pseudo-barbed wire obstacle, making it easier for us to go through that one, but the same 2200 participants had also climbed this muddy hill of doom with wet feet, making this hill even more difficult and slippery.

Since I was wearing my Vibram Five Finger Treks, I had a lot of traction.  The extra traction of the toes really dug into the muddy hill side.  I found no need to use my hands at all, as I used the traction on the bottom of my shoes, in conjunction with my toes like crampons digging into the hillside. I left many runners... er... climbers behind as I triumphantly reached the top of the hill.  I didn't pay much attention to the other participants as I was climbing, but since I did it so quickly, I was sure that I had passed Cecilia.

I waited for a good 30 seconds, waiting for her to catch up.  I gave up and started running to the finish line. 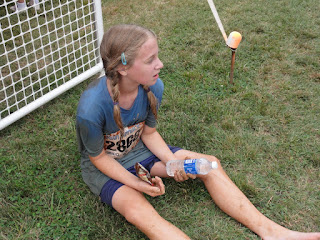 My feet were filled with mud.  The mud had seeped in all over, and running with that much friction was no longer fun.  Since I'm quite the experienced barefoot runner now, I took off the VFFs, and ran barefoot to the finish line.   It was all downhill, and I have learned how to run downhill quite effectively.   I passed many runners, and wonder just how fast I was running on this part of the race.   There was a fire-truck shooting water down on participants, who were just standing there in the water.  I had no time for it, so I just kept running.
I sprinted toward the finish line.  Stacy was waiting for me.  "Cecilia finished ahead of you" she said. I knew Cecilia would never let me forget about this -- she beat me at her first race.