In July of 2019, I ventured to Harris Hill, located in Elmira, NY.  I volunteered to take QQ up to this regional contest to support the US Juniors.  The SSA allows for many members to fly with experienced cross country pilots (I guess that's me), at one regional contest per year.  The planning for this contest was rather late, and the turnout was smaller than it was last year.  In 2018, I attended as a pilot for the Juniors up in Michigan, flying as a guest in the Region 6 contest.
I took young Joshua Barber along with me; he registered as an SSA Junior, too.   Josh had recently performed his first solo at the Week of Training two weeks before this contest.
The Juniors camped at the campgrounds just outside of the Harris Hill Soaring Center.  Juniors from M-ASA and Aero Club Albatross were also in attendance.

The practice day didn't look promising.  We all assembled on the grid.  Since I was flying as a guest, I lined up at the very back of the grid.  We launched, we scratched around in very weak thermals, and landed.  I had a 45 minute flight and went nowhere.

The weather was much better for this day.  The forecast was for a great soaring day.  Blue skies and the perfectly-shaped white puffy clouds.  I was flying with Brady Reisch, a rated PPL with M-ASA.  We left the start cylinder, headed northwest into the wind, toward Corning, NY.  We followed Interstate 390 and its valley up to Dansville, NY.  Conditions were looking great ahead, so we kept going, even further into the turn cylinder.  The plan was to have a nice downwind dash home, maybe after a few more turns under some good looking clouds ahead, just to the south.

I let Brady do the flying at this point; I figured that the day was good enough for me to dig us out of any holes; that's probably my one good skill in cross country flying -- digging myself out of messes.  Brady took a lift line that didn't look that great.  We went South.  Nothing.  Maybe that cloud.  Nothing. Maybe this field.  Nothing.
"OK, Brady, I'll take over.  I'll dig us out. "


Lots of left turns, no really usable lift anywhere.  Brady and I spotted what looked to be a long field, the longest flattest field around.  "If this turn doesn't work, we're landing in that field"  "Which field?" That field with the one lone tree right in the middle of it. "  The lift didn't work.  We were landing.
The KML file above doesn't really show the landing like it should;  Follow the black lines to show the ground track.
I set the landing approach so that we would land to the left of the lone tree in that field. I flared, held it off, waited for the wheel to touch down.  That was the plan, at least.  At about the time I expected the wheel to touch terra firma, the glider kept descending.  It was like jumping into a swimming pool.  Soon the grass was above the canopy, and the wheel still wasn't on the ground.  The sound of a zillion blades of grass scraping the fuselage, wings, empennage, wheel wheel... everything... that sound was a soft rushing noise.  We experienced a soft deceleration.  The glider started to turn left.  I had no control of what happened after that.  Before I knew it, we were turned more than 90 degrees to the left in slow motion.  The glider rolled down a gentle hill, backwards, about 150 degrees to the left of the original landing heading.
"Well, that was unexpected"  Maybe it was Brady who said that.  Maybe it was me. I don't know.  I winced with the mental imagery of the tail boom being busted off.   Most modern gliders with that horizontal stabilizer in T-Tail configuration will get into a twisting motion when the glider is in a ground loop.  If the tail wheel hits the ground while the glider is rotating, the sudden stop at the bottom, in combination with continued motion at the top, causes a twisting motion and breaks tail booms right off of the glider.
I couldn't bear to look at the tail to see how things were. Eyes closed tightly, in exactly the same manner if I had cut myself on the hand and didn't want to look at the blood, I asked Brady, slowly, "Could you look at the tail boom and make sure it's still on?"
"Yep, looks good!"
We got out of the glider. The grass was up to my waist or my chest, depending on the spot. I slowly opened my eyes and looked at the tail.  Looked good. What a relief!  I called the retrieve office to let them know we landed safely, where to get us, who was getting us, etc.
We looked up the hill to see a bunch of kids running down to greet us, and Dad following behind them.  I go straight to Dad:
"Sorry I had to land in your field!"


"Are you all right?"
"Yeah, no damage from what I can tell.  We're all right."
There were about 6 kids there, all excited about the 'airplane crashing in the field.' (their words, not mine).
"Hey would you kids like to go sit in the glider!?"
They all excitedly loudly and simultaneously screamed YEAH!
"I want to sit in the front!"
"Will you sit with me?!"
One little girl looked at the flight computer, still on, "This is the radar that says the tornado is coming!" I got to the master switch and shut it off before any of the kids could broadcast to the whole world on 123.3 by pressing the mic switch.

Since the glider was already a mess with grass jammed into all sorts of places that grass doesn't belong, I didn't really mind that the kids were pawing all over the canopy, opening and closing it, getting their greasy little fingers on everything.

"How are you going to get that thing out of this field?" the father asked.
"You wouldn't happen to have a tractor, would you? Do you have any rope? Maybe a chain-link?"
He looked around for a suitable chain link.  We hooked it up to the CG hook, and the other end to the tractor.  Slowly, we towed QQ out of the tall grass.

Chris Schrader from Michigan showed up with the QQ trailer and my pickup truck.  Another neighbor came over to watch the disassembly. 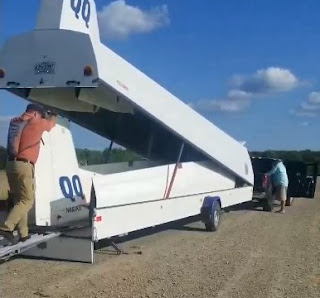 As we were all driving back, Chris Schrader commented that all of the fields around look terrible. "I don't think you should be so hard on yourself for ground looping on this land-out", as he pointed to the marginal field after marginal field. All of these fields look terrible.  If you landed in that field, your wings would have been broken off.
Landing out is a part of flying contests. However, the game really changes when you land out on the first day of a contest, when the conditions are really great. When you are flying as a guest, and not a full competitor, and land out on the first day, you tend to fly a lot more conservatively for the rest of the contest.  And I did.  The weather was OK on the next day, and never really had a good day after that.  Most of the days ended up with rain.  Karl Striedieck went home after the good flying on Tuesday. Noah Reitter went off to represent the US Junior Soaring team in Europe.  It was just me flying the juniors around.

For the next few days at the contest, the local pilots would come up to me. "I heard you landed out near Swain."
"Yep"
"Where?! There's no place to land around there."
There's that valuable local knowledge I didn't have.  They were right.  There were very few landing opportunities.  All of the good land-out spots are on the plateaus. The valleys were swamp land, or not suitable landing locations.

Tuesday was not looking like a good soaring day.  There were rain showers moving through the area. I watched a rain shower approach Harris Hill as we sat on the grid. QQ was the last to take off, and as soon as we got off the end of the runway, we were towed into a rain shower.  While on tow, we turned left and headed toward the clear weather.  We got into a thermal, climbed to the top of that pathetic thermal, and set out on course.  Josh Barber was on board. I made the first turnpoint, headed north and got low.  We hadn't seen a thermal for a while. Oh no, not again.
I got down to about 1200 AGL (I have a fancy flight computer that will tell me how high I am above the terrain, at any given moment) (Maybe this is information I really shouldn't have).  I found the slightest breeze, and held on tight to that thermal.  "Josh, start looking for a field." I rejected most of the fields he selected, but he insisted on his field of choice.  "OK, I guess you're right.  It's the longest one around.  I really don't like the slope on it, though."  All of the fields in this area have a slope.   The sun broke through the overcast and was shining on this field directly above us. If we can just hang on long enough...
50 feet a minute turned into 150 feet per minute.  Within 15 minutes we were no longer desperate for anything, and had enough altitude to make it back to Harris Hill.

The only problem: There was a huge shower right in between us and the airfield.  We had to divert around the shower to make it back to Harris Hill.  Divert enough to the north to stay away from the rain, but no so far to the north that I don't have sufficient glide to make it back to Harris Hill.  Getting rain on the wings would be a disaster, the performance on those wings drops off significantly when there's rain on the wings. It would be like flying through 300 feet a minute sink the whole way back.
Josh wanted us to divert to the west.  We were only a few miles from the outer ring of the second turnpoint.  "No way we have enough to make it to the turn area cylinder AND make it home.  I'm not landing out again!"
Once we got back to Harris Hill, there was a thermal that prevented us from squeaking into the pattern at minimum height. We landed uneventfully.
Later that evening, we reviewed the IGC. I think the field Josh picked out would have worked OK. At least the grass was cut on that field.  There might have been cows, though.

Waiting for us on the ground was a news crew, taking video for the local TV station's evening news.
The cameras kept rolling as QQ came in for a landing.  The ground crew rushed me out of the glider, so we could get out of the way of other gliders landing behind us.  After we got out of the way, I waited for the ground crew to bring me the tail dolly.  In the meantime, we were good background as the news crew interviewed Moe Acee.

After the contest, I drove QQ to Gehrlein Products in Erie PA.  I wanted them to give a very thorough annual inspection after that land-out.  They found QQ in excellent condition.  What a relief!