Well, I finally sanded off the KS.  It took about 6-8 man-hours to remove it from the wing and tail.  Matt Linger, Shane Neitzey, and Melinda Tanner all helped with the awful job of carefully sanding.  While it took hours to do the wing and tail, It took about 30 minutes to get the KS off of the tail dolly (acetone) and trailer (peeled off the sticker).

For the wet sanding, we started with the underside of the right wing.  My thinking was that if we make a cosmetic mistake here, nobody's going to notice small imperfections. To do the work, we placed the wing on saw horses covered in blankets, and had a good working surface at the right height of about a tabletop. Before getting started with the wet sanding, we had to take off small section of turbulator tape that covered the wing letters.  We had to get off the glue residue by using a little bit of elbow grease and bump.

To do the sanding, we started off with 400 grit wet sandpaper, two sanding blocks, a bucket of soapy water, and a long afternoon ahead of us. The strategy for the 400 grit paper is to scrape just the painted part of the letters, focusing on the edges while trying to ensure that the sanding block didn't go outside of the painted area, sometimes unavoidable due to the curvy shape of the "S".

The wet sanding process leaves muddy drips of sanded off blue paint, which we occasionally cleaned off with a squeegee.  Here's a nice view of the tail in two phases.  The "S" is further along than the "K", and has been freshly squeegeed.  The "K" is not as far along in the process.  The sanded-off paint combined with the water from wet sanding and got all over everything, making this look far worse than it actually was.

We sanded with the 400 until just after the white started showing under the blue.  We moved to 600 grit to get the KS to be "ghosty".  moved to 800 grit to use it like a magic eraser and get all the remaining paint spots cleaned up. To finish the sanding, we moved to 1200 grit to do the final smoothing over.
After everything was smooth and even, we did a hard wax with the rotating buffer to get it shiny and beautiful.

After the flying day,Shane towed the glider to his shop.  We designed the best-looking "QQ" logo we could come up with on his computer.  Using the photo above, we tried a wide variety of fonts, from the yawn-worthy Helvetica to a cute-but-unrecognizable Anklepants font.  The Italic font we came up with looked perfect on the left side, but needed some slanting to look good on the right side of the tail. We niggled around with the letters until it looked like they were going to be the right degree of slanting.

Since Shane makes signs for a living, he has all the hardware to cut off vinyl letters and make it look really great. He has this big razor blade plotter that chops out all the bits that the computer program tells him to chop off. Shane placed a piece of transfer paper on the vinyl, measures several times, lined everything up, and peeled off the backing while making sure the letters got smoothly applied to the surface. 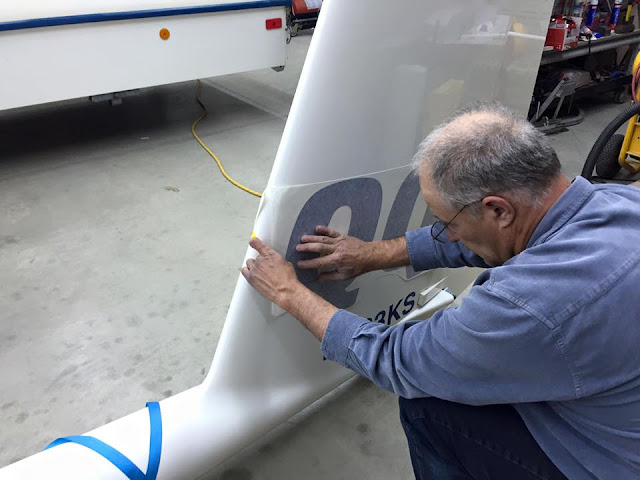 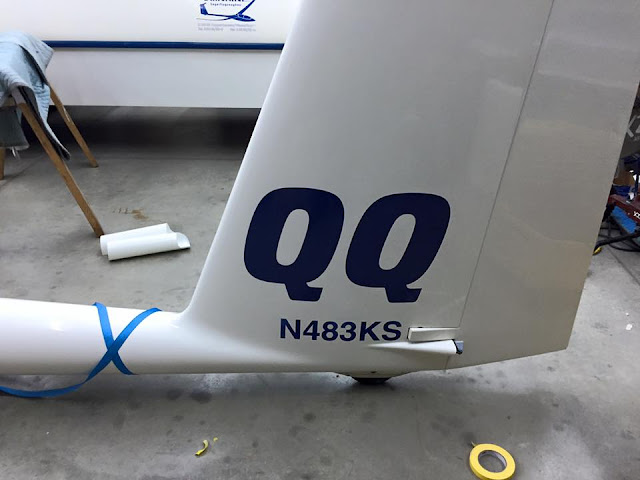 The results: Everything looks great! No bubbles or wrinkles. He's truly a professional.

While spending the whole day at the airport sanding away, many people came up to chat.  Some asked questions.  Many questions seemed to repeat themselves. Some asked me "Why not keep the Contest ID of KS?"   Those contest ID letters don't convey with the purchase of the glider. The previous owner -- legendary Karl Striedieck -- is recognized by his contest ID everywhere in the country. I didn't want to be seen as some kind of impostor.  I chose QQ because it was one of the two letter combinations still available that seemed cool to me. I have also been asked as to why I cared if the contest ID was already registered or not.  If I'm going to go through the effort of sanding off the old contest ID and putting on new ones, I'm not going to choose one that's already been taken.


Other possibilities for available contest IDs that were closely considered were:
"Kilo Niner" -- That would be really convenient. All I would have had to do is paint a small area on the "S" in "KS" and the work would have been done.
"Kilo Eight" -- Same deal.
"Alpha Quebec" -- two letter country code for Antarctica.
"Yankee Yankee" -- I was born in Rhode Island, after all.

I've also been asked, "Why did you do all this sanding? Why not use acetone / paint thinner / solvent?"  Acetone did nothing to this paint.  It wasn't a vinyl sticker pasted on, so it couldn't just be peeled off. KS was painted on at the factory. We didn't want to risk having any sort of caustic solvent wreck the paint job underneath. While sanding was indeed a lot of work, it seemed to be the safest strategy -- so long as we were really careful, and we were!

And if you resolve to play for real money, 35 progressive jackpots dangle six-figure prizes in entrance of their luckiest winners. Please notice that some of our on-line slots games most likely not|will not be} obtainable in your area. You will in a position to|be capable of|have the ability to} view the obtainable games once as} you’ve logged to the web casino. Finding the best slot games for you comes right down to down to} a question of non-public selection. Some gamers prefer the 토토사이트 high-stakes jackpots while others most likely to|are inclined to} focus on to} high-quality graphics and animations. Having nice mobile functionality is a should, as you’ll most likely play through your smartphone.