A Fine Day of Soaring

My wife woke up and looked out the window. She knew that it was going to be a great day for me to fly. I have her trained very well to understand the glory of a good soaring day just by the way the blue sky looks at daybreak.  She coaxed me out the door to go for a day of flying.
I got to the airfield and assembled.  As I attached the wings to my glider, I saw a cloud bank overhead, shutting off all the sunlight to make it a truly good day of soaring.  The soaring day started off slowly, as we sat around waiting for the day to start cooking.
A rated pilot asked me to take a quick flight in the two seater with him, to sign him off for a back-seat checkout.  As we flew, it was glass-smooth. Not a bump along the way.  An uneventful landing later, I was back on the ground and the overcast had moved along.  The cumulus clouds started to form, and we knew it was time to get moving.

For this flight, I decided to mount my GoPro camera on the canopy, right next to the headrest. I was not sure what the photos would look like but gave it a shot, anyway.
I tuned the camera to take a photo every 5 seconds, with a wide field of view. I put on my parachute, hopped in the glider and rolled up to second-in-line for takeoff.
Shane invited me to a task -- his typical task -- for a mock practice day. Signal Knob -> W99 -> Winchester -> Massanutten Ski Resort. Big turn areas around Massanutten, and a 10 mile turn radius around Winchester.  I agreed.  Shane took off first, and waited for me.
By the time I got into the air, the lift was really strong, and I quickly climbed to 7000 feet. We headed off to our first turn point.  Shane had a 500' advantage over me as we set out, and sniffed around a few thermals in the valley.  I didn't find much in the Shenandoah Valley, opting instead to get to the Alleghenies where the clouds looked better. I got lower than I wanted to, and ended up circling in a marginal 3 knot thermal over Ayers field.
Shane came back to my thermal and joined me, about 1000 feet lower than me.  By the time I climbed to 5000 feet, I have had enough with that puny thermal, and moved upwind
to the next good looking cloud to the west.  I connected with a 6-7 knot thermal and knew this was going to be a really great day.   At this point, Shane headed south toward the Bryce ski resort, while I opted to head further toward Grant County airport.

I have never taken this route over the Allegheny mountains. There aren't many land-out options available, so I stayed high over the mountains, deciding to make use of every good-looking thermal along the way.
I made my way across the mountains and got a great look at the town of Moorefield, WV.  I was within 5 miles of Grant County Airport, when I turned east to my next way point, Winchester Regional Airport (KOKV).  Since Shane and I are doing a task, I dug deep into the Grant County turnpoint and knew I was going to score well for this part.  I also knew that the soaring in the area of Winchester is usually much less spectacular. My plan was to take only a small notch out of the turn area around Winchester, then head south as soon as possible. 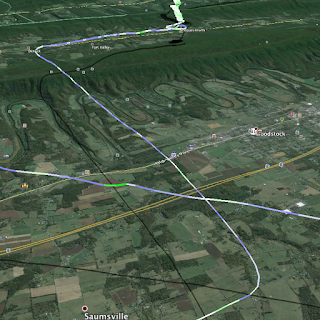 The trip over the mountains to Winchester was quite easy.  I coasted along the cloud bases, only taking occasional turns in strong lift.  I made my way to Winchester with only a few pauses for thermals along the way.
I was right: the clouds near Winchester looked much less-defined than the perfect clouds over the Allegheny mountains.  I headed back to the western Alleghenies to travel along a street of clouds.
The winds on my flight computer were showing a northwesterly direction, at 9 knots.  That means that there might be enough wind to generate some ridge lift along the Massanutten mountains. I looked east and saw many clouds piled up on the leading edge of the Massanutten mountains, so I took a sharp left turn to get to them.
This turned out to be a poor decision. The clouds totally suckered me into making this turn from known good lift into an area where it was not working as well as I had hoped.  As I descended ever lower, I got to a low-point of 3500 feet (only 2000 feet above the floor of the valley below).  I took the first thermal I could get my hands on, and worked its marginal 300 feet per minute until I got to a much more comfortable 6000 feet. This gave me some altitude to work with, where I found a better thermal at 6-7 knots, which took me to 8400 feet, much closer to the bases of the clouds.
The conditions near Luray airport were pretty sparse, but got much better when I left the Massanutten mountains and Luray valley in favor of the Blue Ridge mountains. I connected with a 10 knot thermal that got me much higher. I climbed 4250 feet in just under 5 minutes.  I headed over to the Massanutten Ski resort, without finding much in the way of lift.  The clouds to the south on the Blue Ridge mountains were much more fantastic, all lined up perfectly along the mountains.  I crossed the Luray valley again, climbed up to cloud base, and headed south toward Waynesboro. From here, the soaring was really easy.  Along the Blue Ridge mountains, I bopped along the cloud bases, never turning for 20 miles.
I saw some high cirrus clouds coming in from the west, and thought the day was going to close up quickly. By the time I got to Interstate 64, as it crossed the Blue Ridge mountains, I turned back toward Front Royal. I was dressed in summer clothes, but at these altitudes of around 9000 feet above sea level, the outside air temperature was a frosty 31F. Also considering that I was under the clouds the whole time, I started feeling a little bit chilly.
I decided to do a final-glide to return to Front Royal.  This means that I have my flight computer calculate how high I need to be for a given speed, and I try to arrive at the airport with a reasonable cushion of altitude, but as fast as possible.  This also means that I won't stop along the way to make use of every thermal I find.  I started this at 27 miles from the airport, over the Skyline Drive's "Big Meadows"
The flight computer proposed that I could make it with 400 feet to spare, so long as I started from 7000 feet.  That is a lot of faith to put into a small computer built into my instrument panel.  All the big boys do this, so I figured I'd see how hard it is to actually trust the calculations.
About halfway home, the flight computer continued to insist that I could make it.  The estimate showed that I was only 300 feet above the altitude I needed to make it to the airport.  That still wasn't enough for me, and I chickened out at 10 miles out. I took a quick climb in a marginal thermal, used up 4 minutes of time to climb 600 feet. I took one swoop over the scenic overlook, and headed toward the airfield, flying as straight a line as I could muster.

Shane took my IGC and his, and ran it through a program called "Win Score".  This is the program used by the SSA at contests to do the complicated job of calculating a score for a given task. Even though he was flying the superior glider to mine, I came out slightly ahead. That journey into the cylinder around Petersburg, WV was probably what gave me the better score overall.
I've never had any interest in flying soaring contests, but I can certainly see how it can get addicting. And I can certainly see how flying with a bunch of other cross-country soaring pilots can be very exciting and challenging.