The weekend of 17 and 18 May was one of the most amazing soaring weekends I have ever seen. I spent the entire day flying on Saturday, and didn't dare ask my wife to go out and have fun on Sunday immediately following Saturday's good flight.
Instead, I spent the day with my wife and two youngest children at Skyline Soaring Club's away day. Once or twice a year, the club picks up all the gliders and flies them to Burner Field.  While at Burner Field, the club members get to hang around in a relaxed atmosphere, watching all of the gliders fly in and out of a beautiful grass strip.  Before Bill Burner bought the property that is now Burner field, we used to do this once-a-year away day at High View Farm, which you may recall was the turn-point I used for the Gold Distance Diamond Goal flight that I completed on Saturday.
While we ate sausages and cookout food at Burner Field, an insidious theft was being performed. A member from the Blue Ridge Soaring Society snuck up the Allegheny mountains and landed their club's glider at Front Royal.  His mission was to reclaim the coveted "Boomerang Trophy."
The Boomerang Trophy was created by the Blue Ridge Soaring Society in 1969 to foster inter-club cross country flying.  The trophy works like this:


This tradition has been going on since 1969. It has traded clubs 78 times until Sunday.  The previous few flights were when our club's Shane Neitzey retrieved the boomerang from an incredibly long flight to Erwin, NC, covering 259 miles. Two members from Fairfield's M-ASA (Litt and Higgins) came down to steal the boomerang from us, and Shane promptly retrieved it a few weeks later.
Sunday was JP's chance to return the Boomerang trophy to New Castle for the first time in ten years. When he landed at Front Royal, he looked around and probably wondered if he landed at the right airport.  Where are all of the gliders?  Little did he know that they were all at Burner Field, being flown by well-fed pilots who had consumed their fill of cookout food.
A few Skyliners eventually arrived and welcomed him warmly while JP waited for his retrieval crew to arrive. JP's crew showed up and packed up his club's LS-6 "X8" and took the Boomerang trophy with him.
New Castle is located along a thoroughfare of ridge flying that stretches north all the way to Williamsport, Pennsylvania. It's not impossible or even improbable that an enterprising pilot from Julian Pennsylvania could fly down to New Castle and relocate the trophy well outside of our club's reach. The trophy has gone as far south as South Carolina in the past.  The longer the trophy sits at New Castle, the more likely it will get relocated outside of our club's reach.  Immediate action had to be taken.
I sent a note to our club's mailing list:

BRING BACK OUR BOOMERANG! Jp Stewart showed up from New Castle today, and whisked it back to the protective cocoon of mountains surrounding New Castle International. We need to assemble a recovery team to go get it back! (Just like how Shane Neitzey got it back from M-ASA last year). We can't let that trophy stay at New Castle, since it's "on the ridge" and could conceivably be relocated somewhere along the "main ridge" hundreds of miles away. 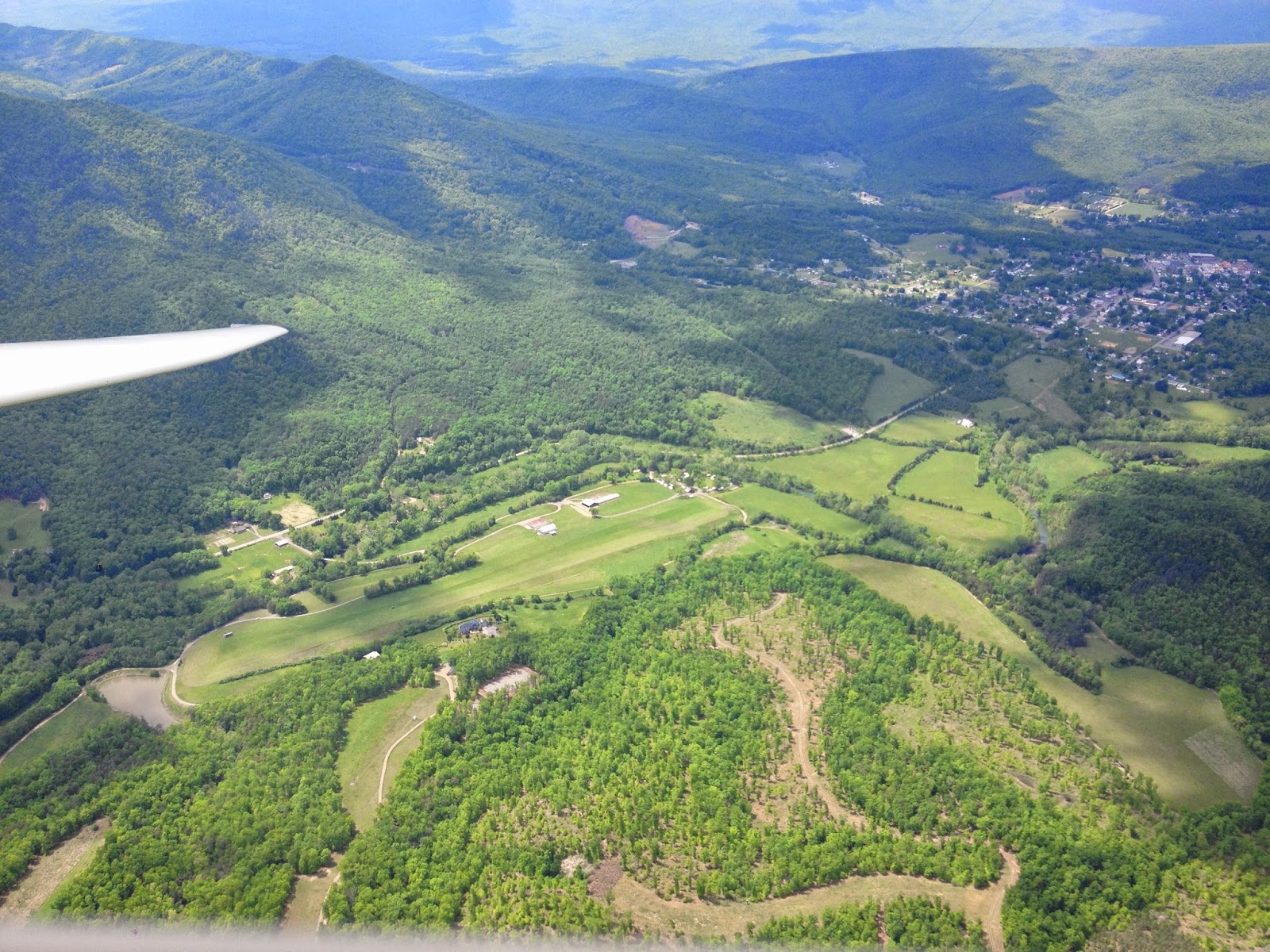 I didn't need any more thermals to get to New Castle.  I had "the Bowl" in sight, and had the airport made pretty easily.  I did come across the final strong thermal of the day, where a wide area of trees were felled in either a forest fire or a logging operation (not sure which).  This was right where 606 and 615 formed an intersection.  In any event, the bare dirt made for excellent thermalling, and it gave me the opportunity to take some good pictures of New Castle as I was circling down for a landing. Total flight time off aerotow to landing was 3 hours 19 minutes, with an average velocity of 78 km/h.
I made an uneventful landing. There was a grass-cutting operation going on at the time, and the regular fixture at the airport, "Dale" passed by several times on the tractor as I took some selfies and posted to Facebook of my achievement.
I also got this fabulous panoramic picture of Juliet Sierra and the airport (You should really click to embiggen!)

The previous winner of the Boomerang trophy, JP Stewart, was in Roanoke engraving his name onto the trophy. He learned of my exploits from Facebook, and had contacted me to arrange the transfer of the trophy.  In the meantime, I waited for Bruce to show up with the trailer, so we could take Juliet Sierra home.  Bruce arrived 47 minutes after I landed.  The route he took seemed to be a good idea when we looked at the map before my takeoff, but could have been a shorter drive if he had just gone down I-81, instead of taking the back roads.  I don't know the exact route he took, but I'm sure it was an adventure!
JP and I met up near Interstate 81 to hand over the trophy. He's a surpsingly good sport, considering the short turnaround time.  The trophy had hardly one night in its home clubhouse.

On the long ride back to Front Royal, Bruce told me story after enjoyable story of his father's incredible life and exploits.  He sounds like a heck of a guy!
When I uploaded my flight to OLC that night, I finally found out why the battery died after only using 10 minutes of flight computer time.  When I was at the Burner Field on Sunday, I carried the Nano along with me, in the event that I was going to fly one of the gliders there.  Apparently, the Nano got "pocket dialed" to turn on and start recording a flight.  The Nano recorded the "flight" of me driving home (I also have solid incontrovertible proof that I didn't speed on the way home).  I didn't realize this at the time, and I didn't realize this when I hooked up the Nano to the glider on the next morning in preparation for the flight.
The Nano has a great internal battery that lasts 24 hours or more.  It did a fabulous job of recording the GPS position of the hangar in which it resided overnight, and slowly drained battery power while doing so.  When I uploaded the flight to OLC, the flight was more than 24 hours long, and started on the 18th of May, not the 19th of May.   The IGC file reports battery voltage every hour or so, and after looking through the file, I could see the battery charge draining slowly.  After being hooked up to the instrument panel, and the aircraft's electrical system, I could see the Nano's record of the battery charge increasing throughout the flight.  That certainly explains why the aircraft battery drained faster than it usually does.
I have taken the trophy to an engraver, who will polish the trophy, that is starting to look rather tarnished, like it hasn't been polished since it was made in 1969.  The trophy will be finished on Wednesday, and returned to Front Royal on the weekend of the 1st of June.  If anybody lands at Front Royal to claim it in the meantime, I will ship or deliver the trophy to the new winner.
Super huge thanks go our to my retrieval crew Bruce Zivic and tow pilot John Noss.  Without whom this day's victory could never have been accomplished.  Also a huge thanks goes out to Shane Neitzey for inspiring me to go get that trophy back as quickly as it was taken.  Finally, thanks goes out to JP Stewart, who came and got the trophy. Without the trophy going someplace else, it would just be sitting in our FBO, getting ever more tarnished and dusty.

Great story Piet!!!
If you don't mind, I'm going to post a link to this in an article I'm doing soon on how I got into gliders. I met a Boomerang recipient from Tidewater Soaring and he told me about his flight across state to get the trophy in the late 90's. I'll comment the link when it's up and posted.
Thanks again
LRM

Lee, the Boomerang is currently at Front Royal, where it's been for a long time now. Please come and get it!