I've been hogging the glider lately.  I have two other partners in my glider, and neither of them have been flying it enough. I'm trying not to get too hung up about it, and will continue to fly it as much as I can until they want to start flying it again.

To that end, since I've been spending so much time flying the glider lately, I've also been doing work on fixing the little naggy things that have been annoying me lately. While I haven't been doing anything to actually repair the glider, I've been doing other things that makes it easier to enjoy flying the glider.  Our road trailer has been in questionably-roadworthy shape for the last five years.  The tail lights haven't ever worked correctly, and I've been spending some time trying to get the tail lights to correctly indicate turn signals, brakes, and nighttime tail lights.

For something as simple and as straight-forward as tail lights, you could think this would be a simple proposition, but it was not.  The original tail lights with the original trailer are about 30 years old, and have the European lighting system.  Amber turn signals, white lights for the reverse lights (whoever heard of such a thing on a trailer?), and bright red brake lights.  The wires that connected to the front were connected and jumbled around by the previous owner, connected with some questionable soldering and electrical tape.  The jumbled mess had finally fallen apart, and could not be repaired in a fashion safe enough for the road.

Even after I managed to get the cables all set up correctly, I realized that I had another, new problem. All of the aging connections were loose enough that any slight bump on the road would cause the tail lights to flicker on and off.   I have had enough with this.

On a Friday with nice weather, I took off the day from work to get everything working on this trailer once-and-for-all.  I went to the Advance Auto Parts and bought a new tail light kit.  When I started working on the tail lights for the trailer, my plane was in the trailer and in the way.  So I took it out, and assembled it, to get it out of the way. 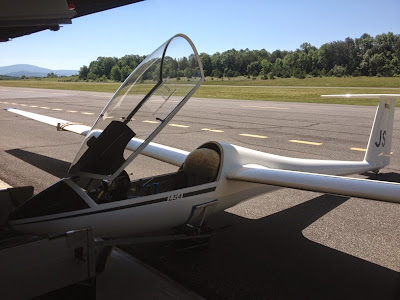 I ripped out the old tail lights, which were attached with rusted-on bolts. There were many swear words shouted out as I tried to disconnect the old tail lights, thanks to these rusted bolts.  The old tail lights were destroyed in the process of removing them from the back of the trailer.  I ripped out the old cables connecting the tail lights all the way to the front of the trailer.  They were filthy, corroded, and the insulation probably was cracked in several places.  I threw the whole assembly into the trash.  The hardest part, or so I thought, was out of the way.  Getting the old hate-inspiring tail lights removed and into the trash.  I had no intention of flying on that day, but the weather was looking better; and there my glider sat. Assembled.  Looking lonely.

Shane, the owner of a shiny and almost-new ASW-27B, came over to me and saw my glider was assembled. "Would you like to come join me on a task? I'm doing a contest next week and want to get in some practice"   He described all of the turnpoints on the task, and made it sound like a really good idea.  He told me about how good the weather was going to be. I looked to the trailer, in its condition -- with no working tail lights.

"I can't really go out on a cross-country flight like this.  If I land out, my trailer isn't road worthy. I just ripped off all the tail lights!" Shane is more charismatic than I thought.  Somehow he convinced me that this trailer-light-thing was only a minor concern, and we shouldn't worry about it.

Soon I find myself programming the task into my flight computer, preparing my pilot-relief kit, water bag, flying hat, and a light snack. It won't be a real contest, since there are only two of us, but there is a task to be flown! Signal Knob, Grant County, Shenandoah, return to Front Royal.  Grant County has a 20 mile cylinder, Shenandoah a 30 mile cylinder.  Any time spent in those cylinders increases the points cored.

Shane heads out first, I follow on the next tow.  He's found a nice thermal in the start area, just over Signal Knob at the northern end of the Massanutten mountain range.  We do our turns (left turns only), and climb until the start time of 13:10.   Shane heads out first.  The first turnpoint is Grant County airport, with a 20 mile cylinder around it. All I have to do is fly to an area just west of New Market, and I nick the turn cylinder. The terrain over that area has many mountains and regions without any landable fields.  I'm not really that eager to head over that terrain without booming soaring conditions.

I head out to the first turnpoint, and find ZERO lift over the valley between the mountains. Not even a whisper of a bump.  By the time I get to the Allegheny mountains, I've lost a fair amount of altitude, but the clouds over the mountains indicated that there MUST be something there.  Shane is already ahead of me, but I caught up to him, as we shared the same thermal for a few moments. I get in a few turns with a bird, and climb a few hundred feet.  Maybe this task will work out, after all.

Shane is ahead of me, tops out this thermal, and heads further southwest to find the next thermal.  Just as he left, that thermal we were both in disappeared.  I don't have a great deal of altitude, and keep searching for more lift further south on the mountain that we were on.   There is a light southeasterly breeze, and I found a small ridge that was perpendicular to this wind.

I was stuck on that ridge for the next hour.  For whatever reason, the thermals just weren't organized well enough, or I wasn't working them, or I was in the wrong place.  I spent the next hour going up and down that small 2 mile long ridge waiting for the next-big-thermal to kick off.  In the meantime, I had that hour to look at the landing fields to the south.  There were plenty.  I also had that next hour to think about how I ripped off and destroyed those tail lights on my trailer, and how I really shouldn't have gotten this far from the airport without a working glider trailer. 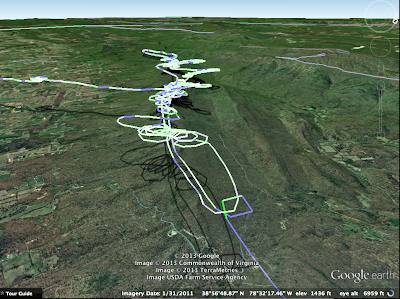 Here's a Google Earth image of me spending an hour stuck on a ridge, looking for an escape route. I entered the scene from the bottom of the picture, and exited the scene with the line moving to the left of the picture.  Blue lines indicate a rate of descent.  White lines are neutral -- neither sinking nor climbing. Green lines indicate places where I was climbing.  The darker the color, the stronger the climb or sink.

I circled over somebody's house on the top of that mountain.  I wonder if they noticed. I wonder if they thought my plane was a government drone performing silent surveillance of their nefarious activities.

Eventually, I connected with a strong enough thermal to escape from the mountain. I headed directly for Burner Field, just west of Woodstock, VA.  If I landed out there, at least the towplane could come get me, and tow me back to Front Royal.  That way I wouldn't have to worry about driving the illegal trailer without tail lights.

I managed to scrape up enough lift to comfortably return to the airport without any further close-calls for landing in a field.  I was really thankful that I didn't have to land out on that Friday.  As I was circling over the airport, Shane called in over the radio.  He had landed out in a field 10 miles south of Burner Field.  I'm so glad I made it back! 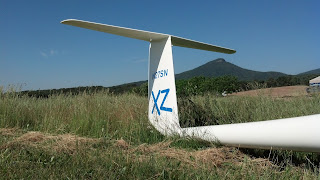 Here's the record of my flight on OLC.